By now, it’s clear that creating great visual content is critical for marketers — and that’s especially true on social media.
It was recently announced that Instagram has doubled its monthly active user base since 2014, which means a lot more people are viewing and sharing photos. Plus, visual content is 40X more likely to get shared on social media than other types. In other words, people like to be shown, not told — and in turn, they share.
For that reason, it’s important for marketers to know how to create compelling visuals for their business’ social networks and blogs. And while it can be worth putting the investment of time and money into photo editing software on your computer, many of us are exclusively using our phones to take pictures and could stand to edit them without uploading them to a desktop. That’s especially true when you’re posting in real time, like at an event.

Luckily, there are tons of great photo and video editing apps out there for mobile devices — some of them even cost a few bucks. But which are the best, free or paid? Check out our shortlist below.

13 of the Best Photo & Video Editing Apps for Mobile

There was a time when I was a bit more old-school in my photo editing. I counted on Instagram tools alone, sometimes combining them with the “enhance” feature on my phone’s Photos app. Then, I learned about Afterlight — a somewhat rudimentary tool, but one that has all the features you need to do a basic photo edit.
From controlling the color tones, to adjusting exposure and brightness, to rotating and straightening a photo, it has everything you need for lighting or color fixes. It also contains 74 filters, including a Fusion feature that lets you mix tools, filters, and textures to create your own personal look. Into frames? Afterlight has a whopping 128 to choose from, boasting a perfect pairing with Instagram.
My favorite tools, though, have to be the ones for Brightness and Shadows. Some pictures do well with a decrease in shadows and increase in brightness for cleaner, fresher look. But flipping those around can also create a more mysterious, nighttime feel — That’s what I did with this photo of tree ornaments. 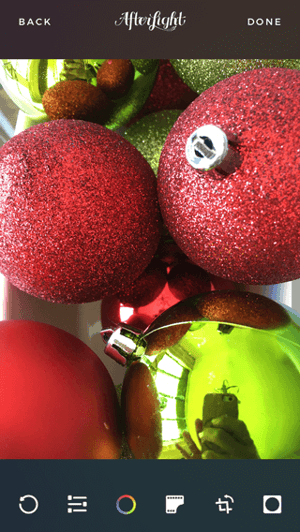 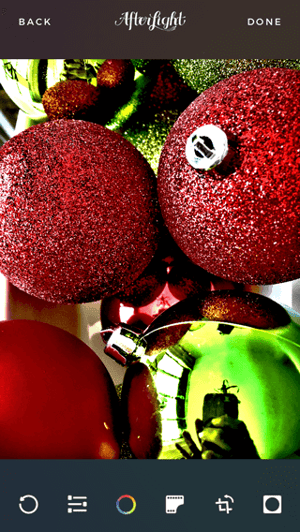 Over the past few years, VSCO Cam has become a highly popular photo editing app for mobile. While it does boast a wider set of editing tools than most other editing apps, its main claim to fame is its filters.
These filters have a softer, more authentic look that resembles real film, compared to the over-saturated looks of many Instagram filters. Plus, it’s great for when you need to edit a photo on the fly. Simply upload the photo to VSCO Cam, slap on one of the great filters — I used C1 below — and call it a day. (There are more filters available for purchase, too.) 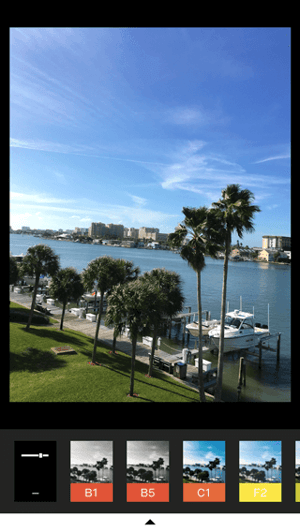 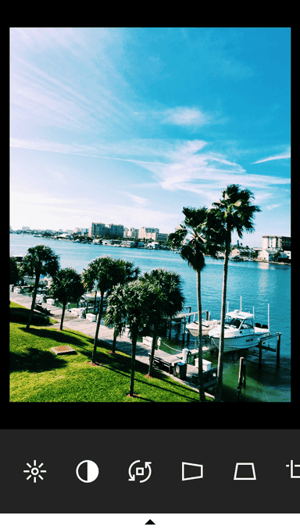 Snapseed is another app that’s great for basic image enhancements. It’s got all the classic adjustment tools, such as tuning, cropping, and straightening. Plus, its sharpening tool is one of the best we’ve seen — it really does enhance a photo’s detail, without making it look grainy, like many other photo sharpening adjusters out there.
But what makes this tool particularly unique is its “Selective Adjust” tool. It allows you to pinpoint an area in a photo and adjust the brightness, contrast, and saturation of that single point. So if you want viewers to focus on a certain part of your photo — say, the buds in the center of a plant — then you can make the buds more vivid.
Want more help with Snapseed? Google, the maker of the app, created a dedicated support page with tips and instructions. 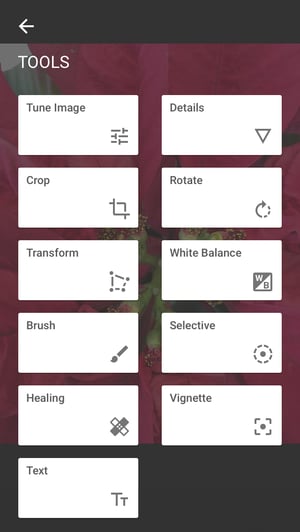 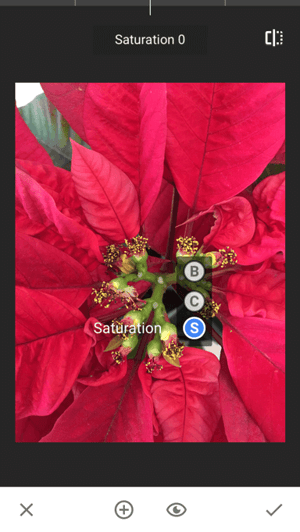 With the highest price tag on the list, you have to wonder what makes Camera+ so special. When it was first released, Lifehacker called it “The Best Camera App for iPhone,” with TIME writing, “If the iPhone’s standard camera is like a digital point-and-shoot, the Camera+ app is like a high-quality SLR lens.”
While the app has many of the classic photo editing tools like color tints, retro effects, and crops, there are a few gems that make it unique. First is its image stabilizer, which helps you capture the sharpest photos possible before you even take a picture. It also lets you zoom in up to 6X, which can really up the quality of your shot if you’re trying to hone in on something far away.
Finally, its Clarity filter is what The Wall Street Journal‘s Kevin Sintumuang calls its “secret sauce — it adds pro-camera crispness to almost any shot.” I’d have to agree — just check out how it enhanced this photo of my dog. 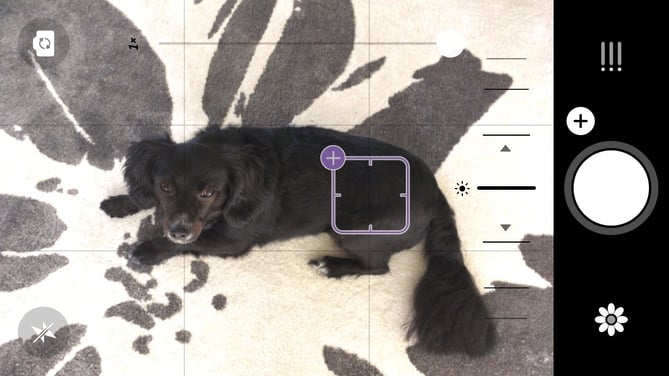 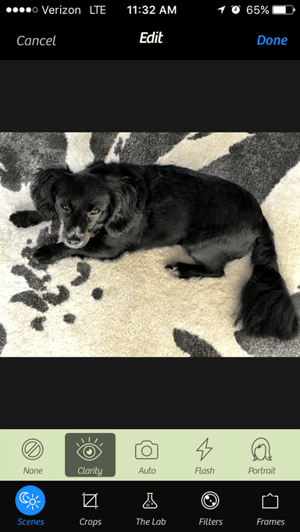 Mextures is one of the more advanced apps on this list — and its crown jewel is layer-based editing. That allows users to stack different adjustment layers on top of each other, moving and editing them individually, allowing for nearly limitless creativity. You can also apply multiple filters, textures, and blending models to the same photo to create a really unique look. If you find an editing formula you really like, you can save it to apply to other photos later, or even share it with your friends.
Here’s what happened when I took a simple photo of candlesticks on a white background only and applied three enhancements — Waterfront overlay, Bokeh Baby Overlay, and the Color Dodge blending mode. 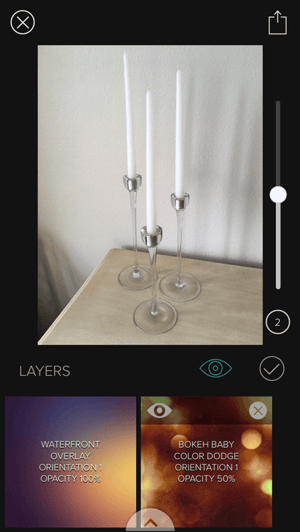 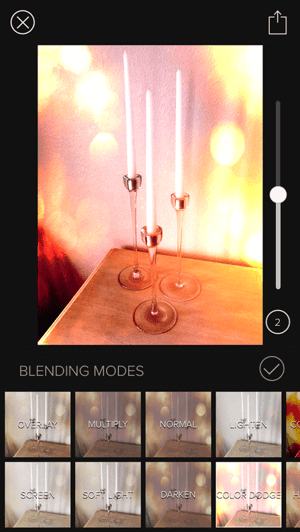 Ever taken a picture of something straight-on — a doorway, a building, your food — and found the perspective was just a little bit askew or tilted? The SKRWT app lets you adjust the perspective of your photos to make the lines look clean and square.
Have a look at what I was able to do with a simple window shot.
Before: 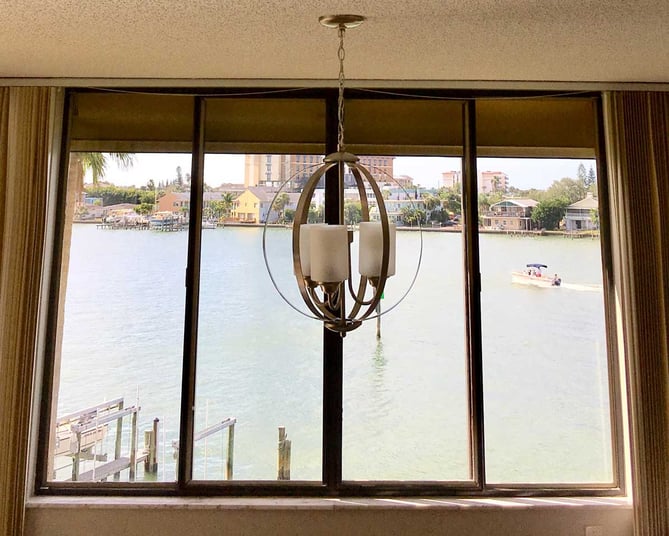 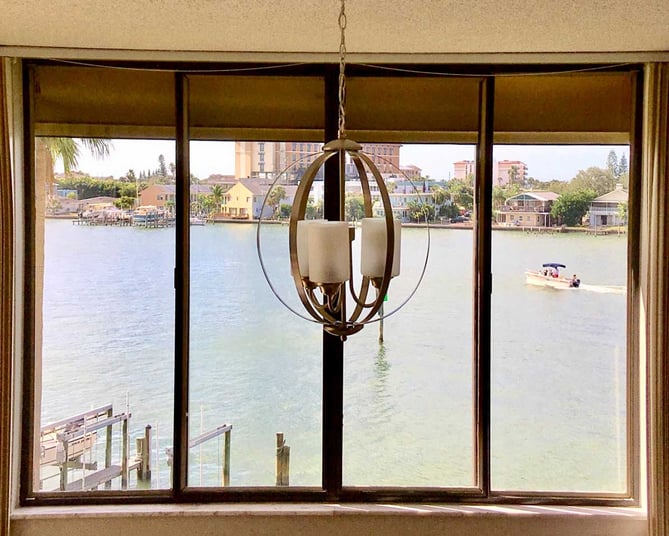 At first, the “before” image doesn’t look that skewed, but seeing the “after” version really shows what a difference symmetry can make. If it bugs you to see a photo that’s slightly at an angle, then this app is well worth the dollar.

Photo collages can be great, whether it’s to show a comparison (like a before-and-after series), or to highlight multiple photos from the same event or theme. Our favorite photo collage app is InstaCollage, mostly because of its wide variety of layouts. It contains several layouts, both classic and fun ones with interesting, colorful backgrounds. Plus, you can add customized text in different fonts, colors, and sizes.
If you’re strapped for time, there are basic photo editing options within the app, too, making it a handy one-stop shop. 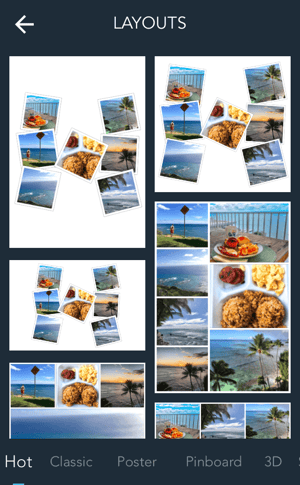 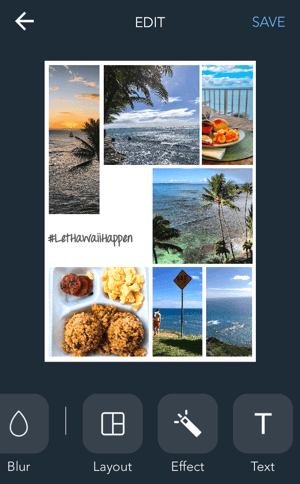 If you’re anything like I am, your personal social media feeds are loaded with images of food. It’s no wonder that food-specific apps are coming out of the woodwork to make photos look even more delectable.
Called out by Bustle for taking “food pictures to some next level gorgeous,” Foodie uses over 26 filters and other editing features to turn what might otherwise be a humdrum snack into a visual feast.
When I applied the CR2 filter to a photo of chocolate candy, this was the result: 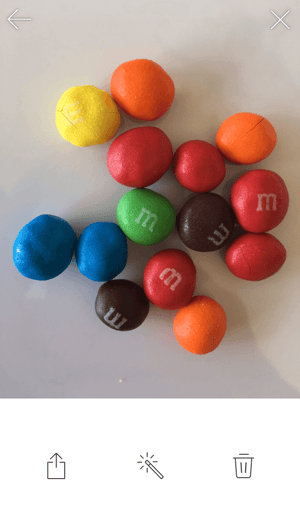 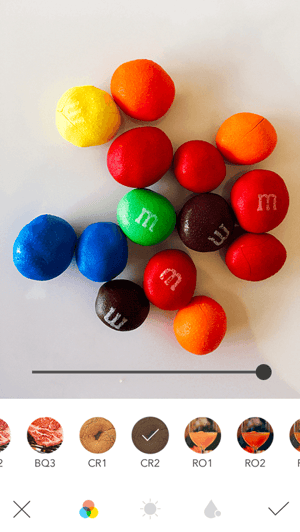 Disclaimer: There’s absolutely nothing wrong with under-eye circles. We all have them, and we sometimes wear them like medals. (We do, however, take issue with and don’t recommend a lack of sleep.)
That said, when it comes to sharing photos of ourselves on social media, vanity sometimes enters the picture. Sound familiar? There’s an app for that.
We like the Visage makeup editor, which instantly retouches photos and lets you add some special effects, like a “Pop Art Style” filter that can make your selfie look slightly Warhol-esque. The app comes equipped with some interesting backgrounds, as well as lighting and color features, with more available for purchase.
The only drawback? The free version is a bit ad-heavy, and unless you upgrade to pro, your finished product will be stuck with a branded hashtag at the bottom. 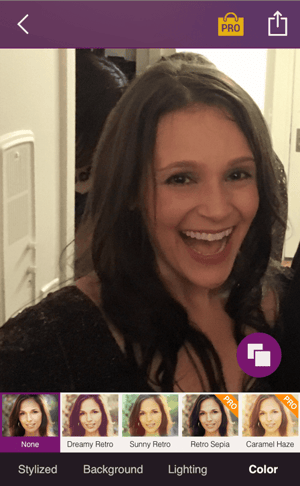 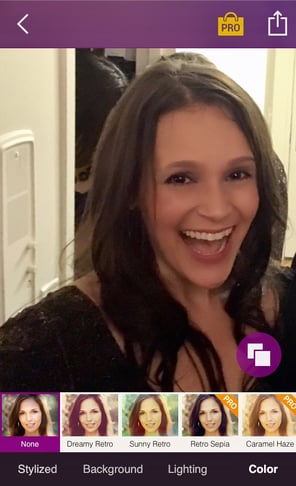 It only seems fitting that the makers of GoPro would also release an app that allows you — as the name suggests — to splice together different video clips on your phone to create a moving collage.
We had a lot of fun playing with this one, especially since Splice even contains a library of musical tracks — among other features, like custom transition length — that can be used as a background for your finished product. You can also use the app to trim and edit the different pieces of video.
I experimented with Splice by compiling this 15-second video of my dog — using only an iPhone 6.

Hyperlapse is an app created by the folks at Instagram that condenses videos into brief, hyper-speed videos that you can upload to Instagram or Facebook. You can choose among a few different speeds, and the app will show you how long the hyperlapsed video will be for every speed in comparison to the length of the video in real time. (So a 40-second video in real time will become roughly a 7-second video in Hyperlapse at 6X speed.) It’s a really cool way to capture something that usually lasts a while — like a sunset or an event setup.
Here’s what happened when I used Hyperlapse to film daybreak at 12X:

We’ve already covered the coolness of photo collages. But what if you could make a video collage? PicPlayPost is a simple app that lets you do exactly that. Just remember that the sound from both videos will play at the same time, so be sure they won’t clash with one another.
There are many uses for a video collage app, but my colleague, Lindsay Kolowich, particularly likes the way fitness professional Melissa Made uses it on her Instagram account. She posts video collages with her performing a workout on one side, while she explains the workout out loud on the other.

Then, there are the times when you just want to edit a video — no fancy collages and no splicing. For that, there’s InShot, a handy app that lets you trim, speed up, or add music and filters to video. It’s pretty fundamental, but with that comes a high ease of use. You can also add a background, if you like, though we think it’s pretty cool to have an overlap of images, like we did with the video below.
I took a simple video of a tranquil beach scene, but enhanced it with InShot’s “warm filter,” and added a fitting musical track to it — a song called “Pikake Stream,” by Kalani. (I recommend viewing the video in its entirety with headphones, especially if you’re having a stressful day.)

See how easy it is to create and share visual content? Of course, mastering these apps will require a bit of practice, but if you’re unsure where to start, just look around you — that’s what we did when we tried each of them.
Think about your marketing goals for this year. Then, ask yourself what kind of visual content — format and subject, for example — will help you accomplish them. From there, you can pick and choose the best apps from this list.
So start getting visual. We can’t wait to see what you create.
What are your favorite photo and video editing apps for mobile? Share with us in the comments.